We took the kids to Tim Hortons this weekend. Put them in touch with their Canadian heritage again. It’s a new experience – the shop only opened Tuesday, and it’s just the second stand-alone Tim Hortons shop in the UK (first was in Glasgow a few months ago). I had heard rumours of Tim Hortons material available in Southampton several years ago. And about three years ago, I was in Belfast doing some fieldwork and happened upon Tim Hortons coffee canisters and sell0-wrapped baked goods in a corner of the Spar. It seemed hidden, abortive, and not necessarily very good.

The opening of the Cardiff Timmies, by contrast, was full of hoopla. It was advertised at its storefront for a couple of months beforehand (picture above is us back in September, sad not to already be eating donuts). When we told the kids, they were surprisingly sophisticated in their response. Having just been to Canada in August, my middle child reflected that if the things that are special over there are available over here, they don’t become as special, somehow. Globalisation summarised by my nine-year-old. 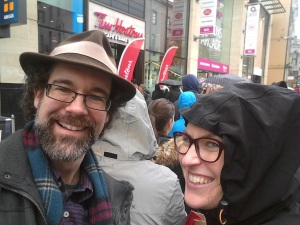 They got over any reticence by this weekend and were just happy to go have a donut. The boys put on their Toronto Blue Jays ball caps (I know), and my daughter swapped her Canada 150 lapel pin from her backpack to her jumper so she could prove her national bona fides. They were a litle miffed that we got the jump on them, having made time in the mid-afternoon for a coffee-donut date à deux.

The irony in all of this is, of course, that Tim Hortons is not my favourite coffee. Nothing like. (And if Macleans’s highly unscientific poll is to be believed, that holds true for many Canadians.) When Cardiffians ask me if it’s as good as their Canadian contacts make it out to be, I have to let them down gently. They answer that, by the standards of British coffee, even bog-standard is a cut above. Fair point. END_OF_DOCUMENT_TOKEN_TO_BE_REPLACED