It’s been a tight couple of months on the reading front or, more precisely, the writing about reading front. Some urgent work tasks interposed, and the last thing I wanted to do was write recreationally after a fair bit of the professional kind. Some of it has turned out good – article has been accepted (hooray!) – and some of it may yet turn out good. Some of it was comments on other people’s writing: yes, it has been marking season, followed closely and urgently by the season of Exam Boards. But we’re through all that, and the only really big duty in front of me is the small matter of a conference I’ve organised that comes to town this week.

Reading becomes a bit of a luxury amidst that, but I did find time to make it through The Shipping News over the last little while. It’s one that had passed me by when it first came out, nor did I catch the film. Not Canadian literary fiction exactly, but in the ballpark – certainly in the right setting – so we feel a bit closer to that one. And after a recent tear on fiction in translation, it was time to return to something intended for my mother tongue.

Clearly, the right place to go afterwards was Accordion Crimes. I actually asked my wife which I should read (the “first” was implied), and she steered me to the Newfie tale. This one, she said, was bigger and sprawlier, harder to capture. Knowing my tastes, she suspected it might not be so much to my liking as a dedicated narrative to a contained story. Nonetheless, I am a musical guy, and it’s about accordions. I’d heard reviews of this one from when it came out that compelled me. So I picked it up, and now I’m nearly through it. END_OF_DOCUMENT_TOKEN_TO_BE_REPLACED 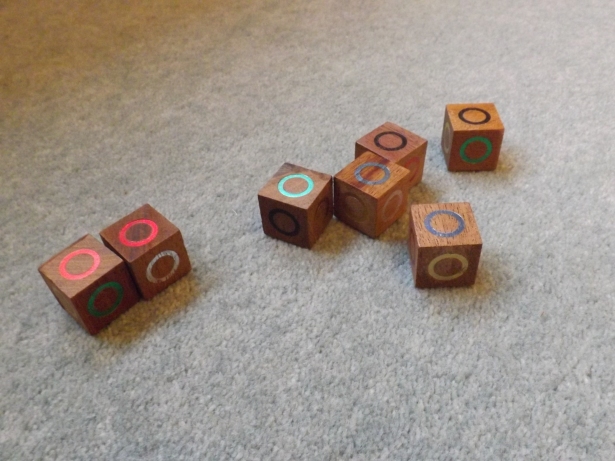 We’re spending the October school holidays in Fife–not picking potatoes, but housesitting for a friend. On rainy days (and this is Scotland in October, so you can be sure we have them) we’re pushed to come up with some indoor fun. 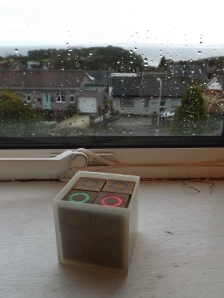 I found this box of eight cubes. They look a little like dice, but instead of numbers, they have shiny circles embossed on each face. The rings are in a variety of colours, but I’ve determined that the cubes are not alike: they don’t all have the same colours on them, nor are they arranged in the same pattern. I tried to come up with some new game, like all the inventive children in fictional stories are able to do. Maybe the colours would have different point values, and you’d count up your tumbled score before passing the cubes on to the next person. (We’ve been reading Arthur Ransome’s books as bedtime stories, and it seems the kind of thing those kids could manage no sweat.)

As I cogitated, I started to stack them in a tower, and before I got too far with these musings, my chaotic toddler did what chaotic toddlers are wont to do: he toddled into the room and knocked it down. So I started to stack it again, and he again knocked it over. If I wasn’t rebuilding fast enough, he would help me until we got to about three blocks, and then he would swap sides and knock it over again.

The bigger siblings were playing with Lego in the next room, and their mum was having a shower down the hall. So I decided it was a two-player game, and my only object was to try to get all eight stacked before he knocked it down. I nearly got there once. I call the game Babel Tsunami for what should be obvious reasons; and, like my latest irritating procrastination vehicle, Scorpion Solitaire, “wins are rare.”