My guitar is dying. 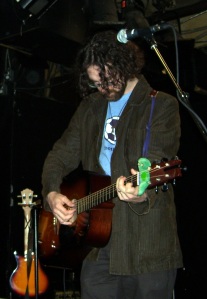 Okay, that’s drastic. It is ageing. Guitars can run and run for a long time, though even so they need love and attention from experienced and knowledgeable people. Wood is a living thing, moving and changing with heat, moisture, and atmospheric pressure, no to mention the occasional bump against a table or crash on stage when the strap suddenly gives way. By dint of their excellence or their expense, some guitars merit every upgrade and remedial intervention they are confronted with.

The implication of that last sentence is that my guitar doesn’t deserve to be made well. That is not what I’m saying. But you have to know a bit about my guitar to get this quandary in the right context.

I bought my guitar when I was 15, in Nanaimo, BC. My best friend and I had resolved to start a grunge band. He was excited to play bass and I, having become quite nutty about Eric Clapton’s unplugged rendition of “Layla”, wanted to play guitar. We started writing lyrics right away, then got to learning how to play these instruments. Ira’s dad had an old Yamaha acoustic about the house, so Ira could start learning right away while he saved up. I borrowed my minister’s spare acoustic (thanks, Glenn!) and got going as well. Starting, for whatever reason, with C. (I know the reason: it was the first chord they show you in Ernie Ball Teaches Guitar.) Painfully changing from C to G7 to play “Down in the Valley”.

I persevered, and after about five weeks, playing every day for an hour or more, I was able to change chords more or less at speed. Yes, I would go ahead with this. Ira, similarly mastering the fundamentals, got an electric bass and amp. My parents, unlike Ira’s, could not give me a financial boost because my older brother had already declared his own desire to play guitar: for him, the tipping point was Nirvana’s unplugged encore, “Where Did You Sleep Last Night?” Our grandmother in Nova Scotia agreed to ship out Uncle Gary’s old guitar, which wasn’t very good and had a hard time staying in tune. Dan quickly got discouraged or lost interest, but it was still this mighty gorilla houseguest. My parents simply could not buy me a guitar when Dan had the hierarchical claim on a guitar that was in the house. No matter. I delivered newspapers, so I had some income. I continued to save, and by the winter, it was time to buy my own axe.

We went down to Dave’s Music, recently converted from Dave’s Pawn Shop. Dave was excited to be selling a kid his first guitar, and all I knew was that I had a hundred bucks in the kitty. He had a used one at that price; I really couldn’t tell you what it was. Budget was the chief – the only – consideration. So Dave put fresh strings on it, talking all the while about what to do with it, how to take care of it. All the advice a kid needs. Dave’s a drummer, and he was distracted by his speech, so he kept tuning the strings too high and snapping them. After a couple of gos, he said, “This is gonna cost me more in strings in the long run. See that guitar there?” He pointed to a new one – a dreadnought shape, I would learn much, much later, with a vintage sunburst look to it. “That one’s $200, but I’m going to put it on sale next week for Christmas. If you can pay $150 now, I’ll let you have it.”

Dave made it sound like some kind of prize. In all honesty, looking back, I can’t believe he was selling them for the price he quoted. It was a St Laurent Etude, made in Korea. Heard of it? Me neither. Not only that, it was a factory second – as he put it, maybe the truck tipped over and some were smashed but some were absolutely fine, only they couldn’t be sold as new, so you get a good price for it. Well, 15-year-old me thought I could get a brand new guitar – and for a deal, no less! I made some kind of doe eyes at my parents, they chipped in the fifty bucks, and I got to take it home.

This was supposed to be one big post about how special my guitar is and how sad it is that it’s dying, but this is already one blog’s worth and I’ve only just bought the damn thing, so I will continue this later. All my early photos of me with the guitar are sitting in photo albums in basements in Ottawa or Nanaimo, so I can’t put them in this post. Here’s one of just the guitar.

2 thoughts on “Gently weeping for my guitar, Part I”