I’m starting this blog with what I will be reading rather than what I’m currently reading, really  just for the visual imprint of the book cover. I am still working my way through the final of Elena Ferrante’s Neapolitan novels, about which more in a moment, but the first picture I attach to the post is, typically, the one that gets to show itself on the social media previews. (I suppose I could learn how to control that element better, but I am not that motivated to learn how. I could do many things to amplify the visibility of this blog, like writing about Pizza Express on the day it’s trending on Twitter. But generally, I’m happier letting it find its own audience and then bitterly cursing the medium and the general public when it doesn’t.)

My mother in law is visiting, and we took a drive up to the very just-so town of Hay-on-Wye last weekend.  Yes, there were pleasant coffee shops and charity shops and antique shops, but the real reason anyone goes there is the bookshops. We made our pilgrimage, and everybody got something interesting. It was really hard for the elder two children to choose, because of course saying yes to something means saying no to (many) other things. My choice was a bit easier: a very attractively covered copy of On Patagonia by Bruce Chatwin was on the newly arrived shelf, and that seemed the right sort of purchase. I even took its picture to get ready for writing this blog. 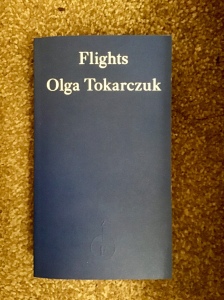 But then the Nobel Prize for Literature happened. My wife and I had wondered a little bit ago whether this would be Margaret Atwood’s year. She’s been tipped before – around the time of the publication of The Blind Assassin, I believe – and now there’s all this renewed buzz. I also thought, though, that she shares some features with Kazuo Ishiguro and Alice Munro – not their love-child or anything, but exhibiting qualities from both camps in a way that might make a panel of jurists think “we’ve had that recently”.

I was quite surprised, then, to see Olga Tokarczuk surface as the winner for their gap year. I wasn’t expecting that and, as she’s so young, I thought it seemed early. (In fact, at 57, she’s nowhere near the youngest, so shows what I know. Though I’ll stand by the “so young”, keeping it for later use, maybe.) I also wasn’t expecting Peter Handke, largely because I’d never heard of him. And this despite making an effort to get acquainted with Austrian literature back in February. Now that I am acquainted with him, however, I kind of wish I wasn’t and am glad to have explored different corners of the country’s literature.

Tokarczuk is in a different category. She first came to my attention with the highly attractive Fitzcarraldo Editions cover for the equally seductively titled Drive your Plow over the Bones of the Dead. As I wrote back in March, it seemed like a funny gift for a seven year old, and then I ended up buying it for myself. The story was in fact pretty straightforward, and the mystery was not too mysterious; that is, the big reveal didn’t have a punch for me as I had handily anticipated it already. But the characters and the situation were no less compelling because of it, and I thought it was really well written. “I’ll need to read more of her,” I thought. Her Nobel Prize seemed the right occasion to toast her, so I’ll check out Flights next and see how it does. 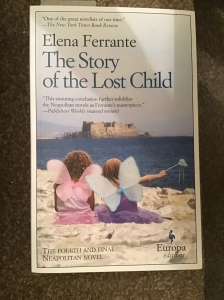 Before that, however, I need to finish Ferrante. It has kept me going, for sure, and it has been worth the effort. After an incredibly strong start, I felt she lost her way in the second a bit. Less of a firm grasp on the central character. As Elena Greco’s world widens, however, a different set of circumstances emerged. The violence she observed in the neigbourhood, in the particular relations of males and females, scales up to political violence. Besides being historically credible, it speaks to our current moment in ways I’m not sure even Ferrante imagined. That comment may be made in ignorance, as Italy’s had a fractious political setting for several years. But living in what should be boring old Britain, coming from supposedly milquetoast Canada, it pains me to think about riots, police checks, and assassinations as a feature of public life that we have to get used to.

Besides that is the maturity that Greco brings to reflect on her own life. Ferrante does a good job with this narrator of exposing her contradictions whilst also having her reflect on them, at least in her more lucid and removed moments. As she observes in Those Who Leave and Those Who Stay,

maturity consisted in accepting the turn that existence has taken without getting too upset, following a path between daily practices and theoretical achievements

These are the sounds articulate, reflective people make when they get older. I like how the narrator and her complicated friend have been brought back together – very novellistic events that bring these complementary opposites into union as the novel cycle reaches its conclusion. Though it is a convenient device, it also has a just-ness bordering on inevitability, and we’d be dissatisfied with a different outcome. And I can’t yet see the specifics of the crisis that will make up the book’s climax. (Drive your Plow over the Bones of the Dead it ain’t.) 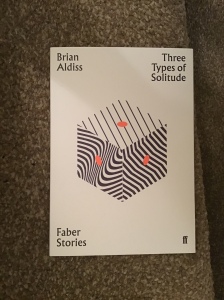 Really briefly, for a really brief book, I picked up Brian Aldiss’s short story with the again inviting title Three Types of Solitude. It’s part of Faber’s cheap separately bound stories series, and I’m a sucker for their design. I don’t read a lot of Aldiss’s work, though I think of him primarily as a poet because of “Flight 063”, which we studied way back in my first-year English class and which has somehow remained very lodged in my brain since.

Short stories are harder than poems, I think. Harder to make come properly good. This one doesn’t succeed for me. Partly because of its excessively male perspective, not complemented by an ironic position but merely a kind of instrumentalisation and abnegation of female characters and motivations. Partly also is the fable-like writing, which I think may have spoken very strongly to 19-year-old me but falls flat a lifetime and more since. Over cheap wine in my student flat on Bronson Avenue, maybe lying back on the bean bag in the bamboo frame with my head upside down, looking drowsily at other groovy friends, I might have spent time thinking through the concrete answers behind the allusive suggestions he makes in the trio. As I am now, I can’t be bothered.