It’s a new year, and we’re supposed to be improving ourselves. The news tells me about studies that allow me to eat a hamburger a week whilst saving the planet and my own health. The host of the open mic at my local has been on ginger beer this January. And our national politicians have learned to put fractious party politics and petty point-scoring aside to work together for the national interest.

I thought I’d get enough laurels for posting my “what I’m reading” blog on schedule at the beginning of the month, but maybe I need to do better than that. I made a killer batch of Seville marmalade (what, already? Well, I didn’t force the oranges to grow so quickly. Yes, I was shocked to see them at the greengrocer already on January like the third. But since they’re there, I do.) However, that is most certainly “something old”, and resolving to make marmalade this year is like resolving to breathe. No points awarded. 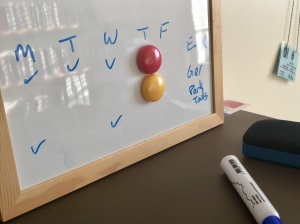 I have therefore taken it upon myself to learn something new. Even put my super duper office whiteboard to work on getting myself organised. Its job since September or so has been to hold my monthly to-do list – not the daily one that fills up scratch pads on my very cluttered desk but the medium-term deadlines that I need to actually monitor but not necessarily actually complete before I go home each day. Now, its bottom half has a new purpose: to keep track of my progress on improvements.

The first one was easy. I’d already digitally committed myself to it. Edinburgh University (my alma mater… <sigh>) has a MOOC on statistics, and I clicked the “yeah, alright” button some time in November. I in fact clicked that same button last year, much more enthusiastically. I’m a quals guy by training, and it is commensurately what I train others in as part of my job. But ignorance repays no one, and this MOOC looked like the right thing to give me some baseline familiarity. I was very enthusiastic in saying “yeah, alright” last year.

You can see where this is going.

I was just too busy in January. We got back into work, and there was all this uncertainty about the strike, and I wanted to get plenty of work things accomplished before we headed to the picket line, so that little spot of improvement went right by the wayside. But God bless them, they didn’t accuse me of anything and merely invited me to take it up again the following year. Which I have done. And, I’ll have you know, I have progressed into Week 2, in the very same Week 2 that the MOOC itself has designated. So far so good so help me, whiteboard.

More practically, I resolved to learn about bike repair. The idea came to me rather by necessity. My wife needed new brake pads, and I recalled that my daughter had also mentioned that her back brakes were feeling a little unresponsive. So I got sufficient pairs of pads for the whole lot. Cue some measure of grumbling, fussing, and “fine tuning”. I put that in quotation marks, because although I was doing the things that, according to the YouTube videos, counted as fine tuning, it didn’t feel fine and the brakes didn’t always feel tuned. But I got my wife’s bike to that magic spot, cycled it up and down the street in the dark, after the kids had gone to bed. (My workshop in the dark, cold months is our kitchen.)

On to my daughter’s bike, and here I was absolutely defeated. Much struggle, quiet yelling, near tears and full of self-doubt. In the end, I had to just loosen the brakes so that they didn’t contact the wheel at all but let it pass through unfettered. Go to bed angry (well, recline on the sofa with a whiskey first, then go to bed merely disturbed). Next morning, instruct daughter to just use the front brakes and go slow. She needs this, see, to get back and forth to school each day, so mid-week fixes that can’t be done by me in the evenings can’t really be done at all. I get on the internet horn and try to track down a mobile repair person.

I was successful, though we couldn’t make contact and seal the deal until the following day, so there was a fair bit of highly dodgy “just use your front brakes, sweetie” going on. But he turned up around dinner time and smoothly got to work. His hands knew what they were doing, and he was sympathetic with my base knowledge but poor execution: having the know-how is one thing, but you also need to just get your fingers used to doing this thing over and over to make the thing come off right. He likened it to tuning guitar strings, with which I could wholly sympathise.

So, my plan was to register myself on a bike repair course. We all use the bikes pretty much every day, so this is just a good and practical skill. However, my good friends up at the Cardiff Cycle Workshop, where we have purchased most of our bikes (and donated several, too,) run a Level 1 and a Level 2 course. Level 1 seemed to be an awful lot of “I already know that” plus a smidge of “that’s what I need to figure out”; Level 2, by comparison, seemed a whole lot of “I doubt I will ever need that”. And it was £65 and £70 comparatively for the privilege. I’m not down and out, and I happily support the Workshop people, but I have also quietly made the resolution I make every year which is to spend less money.

The workstand is on delivery as I publish this. Perhaps I will replace this with a nice picture of it when it arrives.

Besides, my mobile bike repair guy let slip a couple of resources he really trusted: Sheldon Brown’s bike site (“He’s just this NASA-level guy who decided to spend his gifts putting lots of bike information on the Internet rather than sending rockets into space”) and Park Tool’s YouTube channel. I’ve used various different videos of varying quality, but this guy said Park Tool was complete and fantastic. And really, if I spend the money on the course, it won’t get me closer to the physical memory of changing loads and loads of brake pads. At this point, what separates me from the professional is that they do these things multiple times a day whereas I do it, if I’m lucky, once every couple of months. And that’s not liable to change, course or no.

So I spent about a third of that cash on a home bike workstand instead, and let’s see how I get on.

Part three is a tack-on. I honestly thought two was enough for this blog post (and for 2019, to be ridiculously honest). Then I remembered that I’m going to Vienna for a conference next month, and they speak German. “Hey,” said I. “Why not?” So my friends at Duolingo are on the fast track to informing me that “Die Spinner frisst die Insekten” means “The spiders eat the insects”. I’ve yet to determine how this will help me make my way through a city of vast cultural resources, but there’s still a month to go. Watch this space.