Perhaps it’s the increased use of lamps in the evening, or the anticipation of Christmas with the prospect of new books to give and receive, but December seems a time for reading. It was late December last year that I wrote about what I’d been reading – significant books with insights into a particularly unsettled time for me. Things look different for me this year, and yet I still have the impulse to share. Textual analysts will note that, by sticking “this month” up top and adding an actual date, there may be the promise of another such post next month and the month after that. We live in hope.

Since this is a determinedly non-ac blog, I won’t make note here of the various books and articles I’m reading for work. The titles are too long, and they’re not often something that gets a wide readership excited. If I come across a corker, I promise to let you know. Instead, a children’s book, a novel, and a memoir.

We make a habit of reading novels to the kids at bedtime – a chapter or part of a chapter a night after teeth have been brushed. Stuff my wife or I loved from our own childhoods, stuff we’ve heard about, or stuff the kids themselves have suggested. It’s been a little tricky to manage the age span from 12 to 5, but we’ve managed okay through a little generosity of spirit on everyone’s part. 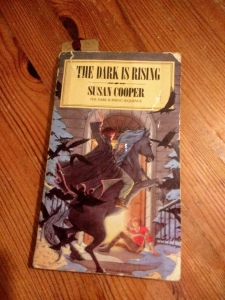 Tonight we’re going to launch into one that was in every school and public library when I was a kid, though I’ve not seen it on any shelves as a parent. The cover of Susan Cooper’s The Dark Is Rising was so evocative for me as a kid: the young boy crouching at the lamp-lit doorstep with the menacing dark figure above him on horseback. The very stuff of cool. I read it and re-read it copious times, continuing on through the cycle and also working backwards to Over Sea, Under Stone, which in fact was the first of the cycle.

The poetry, the magic, and the menace were entrancing, and I was nutty about Arthurian stories, just like Barney in the books, so this was a great take on the subject that jammed the mythic into (somewhat) contemporary settings. (It also fed a fascination with Cornwall which I have yet to make good on by visiting. I’ve been in this country for eight years, and South Wales for three, and still nothing. “We’ll be so close,” I said to my wife when we prepared to move. And yet, as Bill Bryson would tell you, we’re not close at all.)

I came back to Cooper’s books in the last year of my undergraduate degree. I took a class on fantasy lit, engaging with the nascent North American fascination with Harry Potter. It was unique at the time in Canadian universities and running only its second year, just after the publication of the Goblet of Fire and square in the midst of the buzz about the first film. I took Harold Bloom’s line and was very disdainful without having any direct encounter with it, but I was a journalism student and thought it was important to know about the trend. I came out with a rather changed view of the books – both Rowling’s and, sadly Cooper’s.

The writing of this cycle didn’t seem nearly as captivating to me in my early 20s as it had a decade and more before. Lewis and Tolkien survived just fine, but I left that class a little disappointed in myself: what had I seen in these books that had engrossed me?

The Dark Is Rising: A Midwinter Reading Group.
Starting this Midwinter Eve (20 Dec), @juliamarybird & I are running a worldwide read of Susan Cooper’s great novel, The Dark Is Rising. Details here: https://t.co/qg4CJXAwke
Hashtag #TheDarkIsReading.
Spread the word & join us! pic.twitter.com/D5oB9xp9Ke

Last year, Robert Macfarlane and Julia Bird ventured a Twitter-based reading group, and The Dark Is Rising was their first choice. They encouraged people to read and tweet through midwinter with the hashtag #TheDarkIsReading. I admired the idea but was wary of returning to it. This year, though, I’ve relented. We just finished Over Sea, Under Stone last night, and it at least was as satisfying as I remembered it. Reading it aloud in the presence of young people may help. The passage that sticks with me most out of the entire series was Simon’s race down the hillside with the ancient manuscript in hand, pursued by a local tough dragooned into the service of some nefarious strangers. It was great to read aloud (what surprised me was how early it came in the book; I had located it closer to the climax), and the kids are all hooked. I hope the magic holds for the next one. 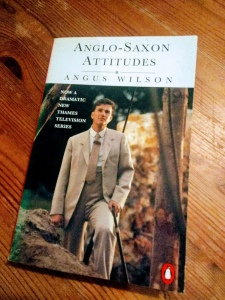 Anglo-Saxon and Celtic heritage is implicated in the more grown-up novel sitting on my bedside table, too. Last month, I walked past a bookshelf in the corridor of my colleagues down in the English department, and someone was doing a purge. I saw the words Anglo-Saxon Attitudes on the spine and thought it was a kind of social history – perfect, if not for me then for my wife, who’s been reading through that period recently. I was a bit surprised to see a telegenic toff on the cover, but it turns out it’s a novel by Angus Wilson which, further, was adapted as a mini-series for ITV in the early 90s. This Penguin edition was published to ride the wave of new attention.

It has a lot to live up to. I’d never heard of Wilson, but hey-ho – there are many writers in the world. The endorsements on the back suggest very good things, and I understand it’s their job to do so. I can go along with a fair amount of superlative writing in such causes, but Anthony Burgess is quoted as saying it’s “One of the five great novels of the century.” Now come on! That is a measurable claim. And the twentieth century has been dubbed “the century of the novel”. There is some competition on this front. One might even claim – I wouldn’t, but I can imagine people who would craft the argument – that Burgess himself has written one of those other great novels of the century, leaving us only three. So, that just seems like a ridiculous statement. Other writers of the period seem to have really liked Wilson as a person, so I can get the loyalty thing, but can it stand up to such an accolade?

Well, reader, I’m about 90 pages in, and I’m not yet convinced. It seems a well observed if clunkily sign-posted evocation of privileged English society mid-century. There are, relatively speaking, very few surnames – it’s a closed circuit, so we’re getting the groundwork of all these generations connected and mingling in problematic ways. That’s a Dickensian unnecessity that looks clever but doesn’t resemble life enough for my tastes. The worse sin, however, is that Wilson seems to have contempt for all of his characters. I don’t know whom to like yet, and more importantly, I don’t know whom Wilson likes. I doubt he likes any of them. He seems to be making people up so that he can mock them all in front of us.

The subject matter revolves around obscure academic battles, and I see enough office politics in my own life. I don’t get much from living through another, imagined set of them just before turning out the light – except maybe the feeling that I ought to observe and act on codes and conventions better than I do, because others certainly must. If they’re all like Wilson’s characters, anyway. Of course, the thing is that Wilson himself anticipates all these observations, so the fact that he makes his characters so immediately aware of everyone’s conversational moves doesn’t mean real people do that. Maybe I’m safe. I may not finish this one. 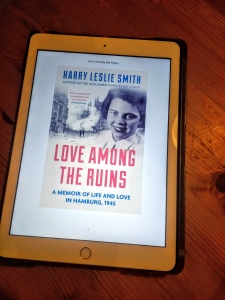 I don’t want to end on a sour note. What has rescued me from Wilson’s satirical contempt is the genuine narrative of an uncomplicated memoir. Harry Leslie Smith is someone at the periphery of my awareness, but many people – especially left-leaning politicians and activists – in both my current Britain and my native Canada are big fans. His Twitter account has been one worth following, but in the last week or so of November, it’s been taken over by his son John. Harry was over in Canada for a visit and fell ill before flying back home. It seemed serious, so John used the account to communicate with all his followers about what was going on. It became clear to him that his father was dying, and his tweets became his own journal of his grief, his love, and his exceptional pride in his father’s accomplishments. There was a lot of genuine solidarity on the hashtags #IStandwithHarry.

My dad had been so dreadfully thirsty because he’d had nil by mouth orders for almost a week. So when he decided that the potential for full recovery was not possible. he was allowed to drink a beer. Sadly though he couldn’t eat. #HarryLeslieSmith

Harry died; John gave him some beer to drink before he died – they had refrained for fear of making him choke, but at the palliative stage he reached, the gesture of indulging the pleasure became more important. Then John slept with the audiobook playing of Love Among the Ruins, Harry’s memoir of courting his wife as an RAF serviceman in post-war Hamburg. God bless them, Harry’s publisher Icon Books released e-books of that memoir and Harry’s Last Stand as free downloads the following weekend, so I grabbed them to learn more and honour this human being who touched so many people.

Love Among the Ruins is a great piece of work. Harry writes with humour and conviction, oscillating well between his own narrative of young love and confusion and the wider challenges facing Germans, no less than the Brits back home who were also suffering from scarcity. He could have done with an editor in spots to clean up repetitions, and I wish he had addressed more of his own story – not for our benefit, but we see that he is learning so much from Friede about her own circumstances and we, or at least I, wish that he would share in return. What did he let her know about the resonances of her own broken family in his Yorkshire stomping grounds? I understand that he wanted to present himself to her as a viable provider, but this seems a kind of omission that many people – I will go out on a limb and say many – men practice. It’s meant to be gallant, but I prefer honesty.

Anyway, it was a smashing read. A good ground-level observation of conditions in Germany and Britain immediately after the war, with the kind of anecdotes that in a novelist’s hands might become symbolic or significant (such as a drunken horse ride) but were in reality just some crazy shit that happened and are a good yarn that Grandpa tells at family gatherings.

And Love Among the Ruins marks a watershed, perhaps a kind of ruin for me. I’m not an early adopter, and I really like physical books in my hand. This came as an e-book to me, and work provided me recently with an iPad which I am still grumbly about for reasons I won’t go into here. Suffice to say, I held this light, slender box in my hands to read Harry’s work, and it wasn’t a chore. I got all the way through it. I’m sure this spells doom – watch this space.