This will be a very short reflection. It’s been a long day, and I need to rest.

It was just last night, while I was reading bedtime stories to the kids, that news came down the wire that our employers, Universities UK, and our union, UCU, had worked out a proposed deal. I must emphasise “proposed”, though they used the term “agreement”. This was also the spirit in the news story at breakfast today on BBC Radio 4.

This is unfortunate, because it was not a good enough offer for the majority of the membership. But of course, we’re not consulted until it has already been put out in public as “an agreement”, which we are then put in the position of rejecting. “Proposal” gives it what it is: a foray by the negotiators, and a pretty poor one considering the depth of feeling.

Put simply: the assumptions that were used to say our pension was “in deficit” or “in crisis” have been answered and refuted already. We’re academics: reading and interpreting numbers like these is our job. Their numbers didn’t work.

Moreover, they had not done their consultations in an entirely fulsome manner. Some responding institutions gave the opinion of just a single person. Colleges at Cambridge and Oxford were counted as institutions in their own right. This was not broad and meaningful.

Despite that, they offered a proposal that tried some sort of half-way measure, as though these flaws which had been recognised as flaws were nonetheless given reality by their making it so. And to rub salt in the wounds, they wanted the union to encourage teaching staff to make up lectures missed during the strike despite the fact that we would be docked pay for those missed strike days. 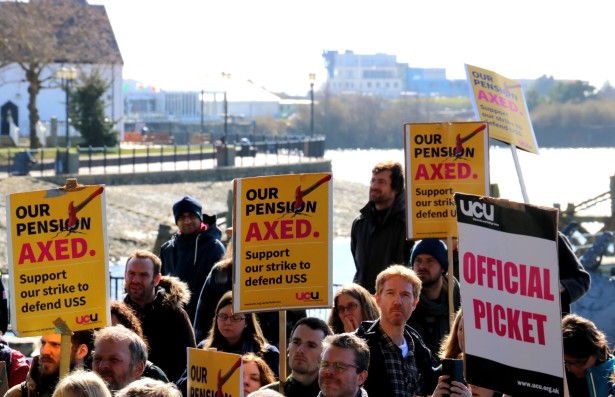 Our message was to reject. That was our message in Cardiff, and we sent our representative to London to relay that message to the national committee. So did at least 46 others, though I think that number might be even higher. In a way, it doesn’t matter: it was “overwhelming”. The members reject it. This is not the deal to pull us off the streets.

Now it gets hard: we have to describe not only why we’re striking but why we rejected this chance to get back to work. But we got great support from politicians that we met at the Senedd. And we affirmed each other. This afternoon, I met with students at a teach-out session where we talked about communication, about isolation through individualisation and the inequalities present in our system. They support us, but we need to communicate with them, and work (when we’re back at our desks; probably Monday) to protect and support them.

This still matters. So we continue.