We took the kids to Tim Hortons this weekend. Put them in touch with their Canadian heritage again. It’s a new experience – the shop only opened Tuesday, and it’s just the second stand-alone Tim Hortons shop in the UK (first was in Glasgow a few months ago). I had heard rumours of Tim Hortons material available in Southampton several years ago. And about three years ago, I was in Belfast doing some fieldwork and happened upon Tim Hortons coffee canisters and sell0-wrapped baked goods in a corner of the Spar. It seemed hidden, abortive, and not necessarily very good.

The opening of the Cardiff Timmies, by contrast, was full of hoopla. It was advertised at its storefront for a couple of months beforehand (picture above is us back in September, sad not to already be eating donuts). When we told the kids, they were surprisingly sophisticated in their response. Having just been to Canada in August, my middle child reflected that if the things that are special over there are available over here, they don’t become as special, somehow. Globalisation summarised by my nine-year-old.

They got over any reticence by this weekend and were just happy to go have a donut. The boys put on their Toronto Blue Jays ball caps (I know), and my daughter swapped her Canada 150 lapel pin from her backpack to her jumper so she could prove her national bona fides. They were a litle miffed that we got the jump on them, having made time in the mid-afternoon for a coffee-donut date à deux.

The irony in all of this is, of course, that Tim Hortons is not my favourite coffee. Nothing like. (And if Macleans’s highly unscientific poll is to be believed, that holds true for many Canadians.) When Cardiffians ask me if it’s as good as their Canadian contacts make it out to be, I have to let them down gently. They answer that, by the standards of British coffee, even bog-standard is a cut above. Fair point.

What makes Timmies special is the cultural spot: mass comfort. I have so many cultural touchstones, and so do so many of us. The cheesy ads. The nostalgic cup. And, er, the donuts. Sitting down to drink our original blend, my wife was transported to high school theatre rehearsals. And, as a kid, it was all about the donuts for me. I didn’t drink coffee til I was in my 20s, but put me in front of a lemon-filled powdered-sugar donut and I could develop a habit.

I even wrote it into a song – my ukulele reimagining of the Passion of Christ, set in the Greater Toronto Area. “At the Tim Hortons Drive-Thru, I blessed my Boston Cream. It was richer than the kingdom, far more vivid than a dream.”

When I play it for people in the UK, I have to do some interpretive work to help them understand what the landmarks mean. I describe Tim Hortons as having the shelf contents of Greggs but occupying the cultural place of a Wetherspoon’s. A posh friend told me that Wetherspoon’s wasn’t actually all that good an association. I think he’s starting to get it.

Naetheless, we must love the Tim Hortons, for we are Canadian. So, spreading out some tweets I tweeted back on opening day, my Top 3 Tim Hortons experiences.

We moved from Calgary to Nanaimo when I was 11. I didn’t want to go. I was happy at my school, had good friends, could ride my bike with confidence from my Ranchlands subdivision along and across major roads to the pool and library at Nose Hill. Yet move we must, because the wants of an 11 year old don’t amound to a whole hill of beans when you need to work and are spinning your tires in the late-80s oil doldrums. Dad headed out in the summer to open his picture frame shop (?!) and find a place for us to live; once he’d found a decent rental, we followed him, just after Thanksgiving. Me, my brother, the dog Rusty, and my mom in our Buick, driving two days over the Rockies. Made it to the ferry terminal in Tsawassen just minutes after the ferry had left. And it was raining. And did I mention Tsawassen? So my mom made an executive call that I fully support and took the ferry to Victoria, after which we drove up the road I would later learn was called the Malahat.

My  head pressed despondently against the window, I was looking for the landmarks we’d been given. We would know it was the right strip mall because there would be an Earl’s, a Wendy’s, and a Tim Hortons. Earl’s was our first meal in our new home. Wendy’s provided for many a Friday movie night at home, and they later employed me for a year. Tim’s? Stuff of legend. (I read in a Macleans article as a teenager that our Tim’s – the Rock City Plaza one – was the busiest in Canada. I had a hard time believing that, but I would later learn that journalists never lie to us.) 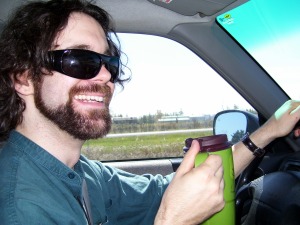 It is super-easy to be smug about Tim Hortons coffee when you’re a slick hipster city dweller. We had fairly traded single-source local brew just a few blocks up the road from our place, so it was as though the several nearby Tim’s didn’t even exist. That in my hand on the right, there? A Tim’s mug – a parting gift from the Montessori students to whom I taught ukulele for three years. Its contents? Bridgehead Nicaraguan Dark. Take that suckas. Now fast forward on the cross-Canada road trip we were taking with two children under 4 in the back seat. I know, what the hell were we doing? Anyway, fast forward a few days to Highway 11 north of Quetico, and we are literally hunched over the dashboard, looking for signs of a Tim Hortons sign on the horizon. Canada is big, and in many cases, it is only Tim Hortons that makes that kind of distance possible.

So, the youngest – 18 months at the time – kind of enjoyed the first two days. Get in car seat, giggle a little, fall asleep to the lull of the car on the highway. Wake up,  cry a bit, get a diaper change, whatevs. Drive a bit more and we’re done for the day. Leaving Wawa on Day 3, he figured out that this was actually what we were going to keep doing. Maybe forever. So, breakfast at the Tim’s, then onto the 17. Big Goose in our dust.

His mum: We don’t have any, hon. Just had breakfast.

Mum: We’ll get some more in the next town, okay?

Friends, the next town was White River. 89 kilometres away.

He did not stop yelling for bloody apple juice the entire time.

Though when we did stop in White River, we found not only apple juice but a playground with a big Winnie the Pooh.

We went to the Hip at the Corel Centre. This was supporting the Music at Work record, and they crossed Canada doing two massive sets, no opener. Chris Brown on keys and Kate Fenner on backup vocals. Very, very sweet show. I worked at a church in Kanata, which was at the exit before the exit you take to the Corel Centre. So we avoided a bit of traffic and extortionate parking charges. But we had to walk in the cold and snow of early December in Ottawa – a very un-Kanata thing to do, for those who know Kanata. Walked back, needed to warm up, still buzzing from the show. Clearly, the right thing to do was go to Tim Hortons and have chicken stew in a bread bowl. Gives one all the right kinds of courage.

Welcome to the block, Tim’s. We’re glad to have you.

5 thoughts on “Make mine a double-double”