Summer’s here, and I’m on annual leave. Kids are out of school, and when my wife isn’t bashing away at the keyboard upstairs, we’re finding lots of time for other good things. Picking blackberries, riding bicycles, eating/making hummous that makes your bread look like a slice of watermelon. Reading Tragically Hip think pieces (including my own). 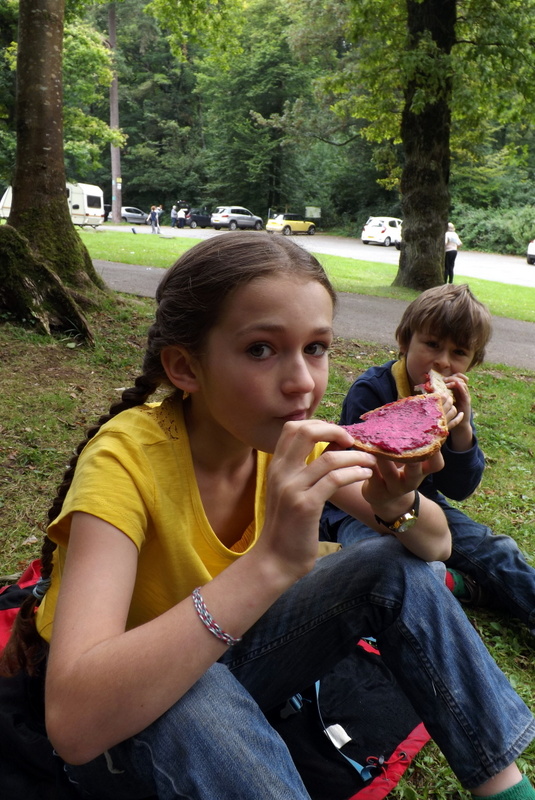 Hummous that makes your bread look like a slice of watermelon.

It’s also a good time to reflect on summers past, and share a few stories. The one I’m sharing here was inspired by my wife’s blog from a few weeks ago about a wasp trapped in her office; she melds it with a memory of a wasp from her childhood, full of danger and suspense and blessed maternal rescue. I’m biased, of course (reader, I married her), but I think the writing is exceptional.

One afternoon, I sat on the swing, kicking my sandaled feet, and a wasp settled between the straps. I froze. I couldn’t swat it away because I had to hold on to the chains of the swing. I tried to kick, very gently, to dislodge it. The wasp crawled over the strap and down along my foot. Then it crawled onto the bottom of my foot, its tiny feet and buzzing wings moving between my sandal and my skin.

Sometimes, speech is impossible, but I must have said something because my little brother ran for Mum. I gripped the swing’s chains tightly. The wasp explored. No wind moved the leaves above my head. Everything stopped. Except for those tiny, tickly feet.

I have felt those tiny, tickly feet.

When I was six, my family drove thousands of kilometres from our home in Calgary, Alberta, to my maternal grandmother’s place in Yarmouth, Nova Scotia. Massive road trip, for which we had got rid of my mom’s beloved little Honda and acquired a Plymouth Voyager minivan. My first time crossing the border (flying as a baby doesn’t count), as we headed south halfway across the Prairies and tripped through the US Midwest and Northeast all the way to Bar Harbour, Maine, where I woke up at first light in a car park with a giant ferry in front of me, the nose pulled up for cars to drive in. It may be clichéd to say it was like the mouth of a large, industrial beast, but I was six years old and still learning about clichés. It was a wholly memorable trip.

But the most visceral of all my memories from that summer was the day I left Gram’s cottage to visit the lake. The path led down a little hill and over a small wooden bridge that spanned a mammoth ditch. Clump, clump went my sneakers, followed by the crunch of gravel from the road. There I paused, because I felt a tickle.

I looked down to see a hornet resting contemplatively on my skin.

“Resting” and “contemplatively” don’t really suggest what was about to happen, but that moment took a lot of time in my imagination. I can see the insect so clearly, the three sections of its body, its transparent wings. If it sat there as long as I imagine it did, I had ample time to brush at it with my hand or shake my leg or something. Anything. I did nothing, and that moment of taking it in probably lasted only a fraction of a second.

That’s when the hornet stung me. And I screamed.

I had never been stung by such a creature before. Mosquitos are not a patch on this, nor even the horse flies I met in Red Deer. I yelled so hard, my (Great) Uncle Horace told me later he could hear me at his boathouse, a mile away. I ran back over the bridge, up the hill, back to the cottage where my mother was already rushing out the door to see what was wrong. The comfort, the cuddles, the inevitable ice wrapped in a tea towel. Something cold to drink.

After I’d calmed down, my mother suggested we go together down to the lake and take Gram’s rowboat out. So we did: down the path, over the footbridge. And another blasted hornet zoomed up and stung me – same place but on the left leg, this time on the inseam, so to speak. I yelled again and my mother (who was wearing blue jeans; as we tried to make sense of it all later and I asked why it didn’t sting her, she said it was because she was wearing long pants) scooped me up by the armpits and carried me back to the cottage.

I remember drinking coke with ice and a straw, reading an encyclopedia entry on “hornet” to learn about this creature, and occasionally I looked out the window at the ditch and the wooden bridge, where my father and my Uncle Gary were burning off the hornets’ nest with an improvised flamethrower – an aerosol can and a cigarette lighter. Tonight we smoke them out, sings the poet. When he introduced the song on a live Hip album recorded in Detroit, Gord Downie suggested that “adolescence, in essence, is all about trust.” He could have been speaking about my mother. Or Katie’s.