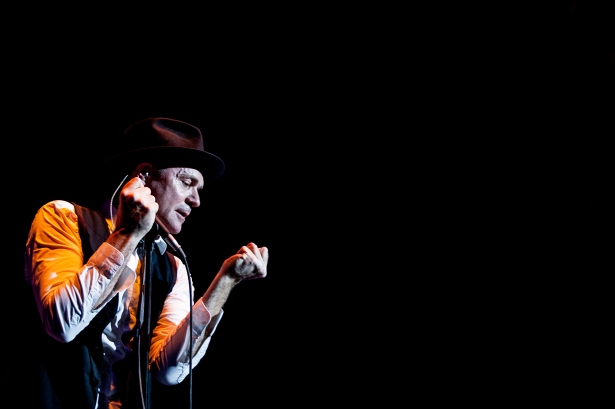 It says something that a friend of mine – a journalist back in Ottawa with a vigorous Twitter account – could write this, and I would know exactly what he was referring to.

Residing in Britain, I had been living with the news of Gord Downie’s brain tumour for five hours before he and other friends found out. In a year that started so hard and has kept being hard, this one is particularly hard. Like Bowie for all the freaks and weirdos in Britain and then beyond who needed someone to attach to, Gord Downie and his mates who make up the Tragically Hip were epochal, giving an indigenous confidence to young, pop-oriented Canadians just as the alignment of music video television, more accessible recording and distribution, and government regulation made it possible and even acceptable to dig Canadian music.

But that would say little on its own about the courageous, enigmatic, smart lyrics and Gord’s absurd performances. The band was more than special – it was unique. Looking now at their performance from 1995, when Dan Ackroyd introduced them on Saturday Night Live, it amazes me that their management thought this could work. Think of all those Americans watching the screen – who is this guy? What the hell is he talking about? I mean, grunge made opaque lyrics cool (hip?) but there was an intent behind these words that just did not compute:

At dinner last night, we told the kids about when they were smaller – our nearly-ten-year-old not yet four – and we were in Nanaimo, visiting my folks. My dad got a gig down at the Port Theatre filming a dance company that had arranged a show Beside Each Other to Downie’s music and poetry, and he had tickets to spare, so my wife took our daughter to the show. We reminded her of how physically she responded to the dance. The words, I expect, flew by her.

After the kids were in bed, I put on some Hip, of course. It’s difficult, because most of our CDs are back in Canada, including almost all my Hip. We made some tough decisions before that first flight and took only the double-disc Yer Favourites, a best-of collection that is, at least, curated in its order rather than arranged chronologically. (Why do I even have a greatest-hits collection? Necessity: our last road trip across Canada as a family, I realised just before Mattawa that we hadn’t brought any Hip with us – an essential feature, for reasons I’ll explain in another post. So we bought it at the WalMart as a corrective.) I put on disc 2 – the better one, I think, as disc 1 seems to go a bit more for the obvious hits, in a more requisite order. Starts with the obligatory “new” track, then “Grace, Too” (which should be first), then “Music@Work” (which in my opinion shouldn’t be on there at all but which they insist on putting near the top of sets because of its thematic appropriateness).

Disc 2 instead starts with the dark horse, “Fully Completely”.

Quite. And then this, holding the same place in the second chorus:

This is followed by throw-away bar-rocker “Twist My Arm”, which nonetheless has Gord’s shrill, paranoid delivery of the complementary line:

We can only hope.

Then, of course, “Courage”, which already takes the brave step of name-checking mid-century novelist Hugh Maclennan in the title (go on, mass public: I dare you to stop paying attention.)

“There’s no simple explanation
For anything important
That any of us do.
And, yeah, the human tragedy
Consists in the necessity
Of living with the consequences
Under pressure, under pressure.”

Every song in the corpus contains a consolation for the desperate fans all reaching back to the old albums, hoping to find one there. It’s a great gift, as is their vow to take Gord on the road one more time and connect with the fans who have connected with them. “We are all richer for having seen them tonight,” he said of the Rheostatics, but of course we say it of them. I hope he makes it. I wish I could be there.

8 thoughts on “The Darkest One”