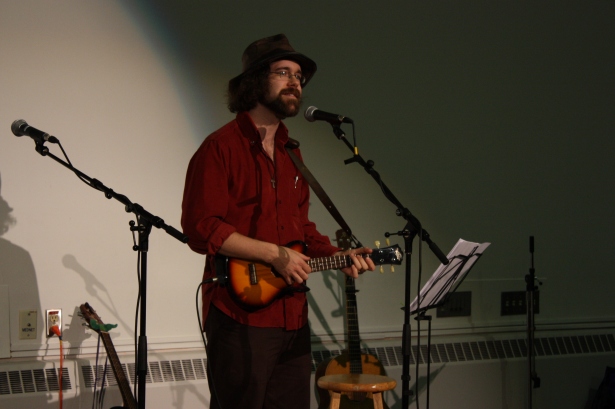 So I wrote about a change in my ukulele fortunes a while back, when Child Number 2 started singing in the choir and I lost my Monday night pupil. (We still have not fixed a new time for lessons, and this is really bad, but he can still play the hell out of “Taps”, so all is not lost but merely on hold.) I referred to a book on the uke by Ukulele Orchestra of Great Britain member Will Grove-White, and I sorta intimated that I would write a review of it soon. Sooner, later, whatever: here it is now.

The book is called Get Plucky with the Ukulele, and it’s a gift to the modern world, coming at the right time now that the second wave of ukulele has crested and the Good Ship Jumping Flea has come down the other side, not upturned. The wee instrument got rather faddish, to the point where US comedian Ria Lina could sing “Not Another Ukulele” at the Edinburgh Fringe on the ukulele with as little irony as is possible in such a setting. You still see them in shop windows, but I think the surprise factor is gone. Those who bought them in the swell of the hype may still have them kicking around the house, so when you talk about playing it, the response is no longer a) are you kidding?, b) oh, I do that too!, or c) ukulele? pfft, that’s so Hackney-three-months-ago now where’s my beard oil? We can confront the instrument as it is, unironically and neither undersold nor overhyped.

Grove-White records this rise and fall in a frank and honest way, taking (as a member of UOGB) no small amount of credit for the rise. But his history goes back – not just to the predictable progress from Portugal to Hawai’i but also to some surprising figures including Wales’s own Tessie O’Shea (and as a Cardiff resident now, I’ll have to look her up) and Charlie Burse, the ‘Ukulele Kid’ who, Grove-White tells us, inspired a young Elvis Presley with his dance moves. Modern virtuosi get appropriate mention – Jake Shimabukuro and my personal inspiration, occasional mentor, and fellow Canuck James Hill – as do the pop rock popularisers George Harrison, Pete Townsend, and Eddie Vedder. And fear not, the lions of the instrument also get their due: George Formby and Tiny Tim.

Grove-White is trying to chart a middle path between ukulele as novelty act and as pretentious arty instrument. His writing style, complete with cheeky asides and self-deprecating jokes, veers closer to the novelty pole than the arty one, yet you get the sense from him that he, too, wants to move beyond strumming the banjolele to support naughty lyrics, beyond the question that haunts every ukulelist who ventures into public: “Can you play ‘Tiptoe Through the Tulips’?”

It’s a fun book, with a writing style and visual aesthetic that screams approachability, though his description of the “jumping flea” etymology for the instrument’s name could also describe the book itself: “capable of great leaps and feaths of strength, but they can get a bit irritating if they get too close.” The real gift, as far as I’m concerned, are the wonderful photographs and accompanying anecdotes. I’ll mention three: I was so pleased to learn Robert Louis Stevenson was an enthusiast and brought one with him on his voyages. I also liked the shot and the story of Marilyn Monroe playing the “Some Like It Hot” ukulele for journalists after Arthur Miller was acquitted of un-Americanism following McCarthy’s grilling. According to Grove-White, “the LA Times reported that Marilyn celebrated by serenading the journalists with a rather tuneless version of ‘Happy Days are Here Again'”. Amazing.

Best of all is the story of Neil Armstrong, just back from the moon, who spent nearly three days in quarantine with the other astronauts in case they had some freaky space sickness. To help him chill out and pass the time, he would strum on the uke. Grove-White deadpans that, “[l]ocked in a tight spot for 65 hours with a man armed with just a ukulele might not be everyone’s idea of a good time,” but the accompanying technician, John Hirasaki, says “It lightened things up after what had been an extremely stressful mission.” (Grove-White also notes the huge bravery of Hirasaki to be present with the three, not knowing if he might also get sick and die, and without even the benefit of having gone to the moon first.) The book reproduces a photo from a radio reporter lurking outside who caught Armstrong strumming, his intense gaze fixed past his shoes but probably seeing something miles higher, and it’s haunting. Super-cool. 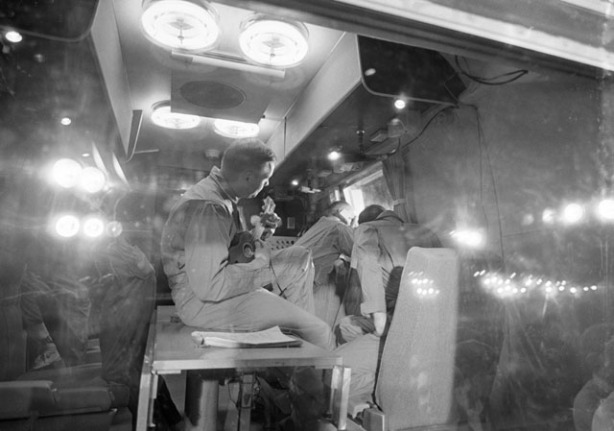 Not the Neil Armstrong photo mentioned. This one courtesy of NASA’s Human Space Flight gallery, used with permission. (Photo s69-40210)

The book is not just about the ukulele, though. It’s not just a piece of witty journalism. It’s also a how-to book, and here I must both praise Grove-White and respectfully disagree. Whereas he can navigate between the novelty-arty poles, when it comes to pedagogy, there’s pretty much only two positions: learn the notes or just mess around. The author is clearly of the latter camp. At the start to the second section, he says as much:

“I’ve taken the view that the reason you’ve chosen to play the ukulele is because you don’t particularly want to have to learn how to read musical notation. […] The ukulele is an easy instrument to learn, and it soon rewards your efforts.”

On the one hand, yes absolutely, and he’s bang on. It is easy to get going on, and if you someone to show you a few shapes and then you strum about and get some cute songs, good on yer. Pound for pound, this is the most efficient musical instrument going. But who wants to be that dependant? I veer to the arty-pretentious pole as it is, and I do want my music to be taken seriously. I think striving for some measure of technical prowess is good, and you can do that with the ukulele, too. Grove-White tips his hat to Shimabukuro and Hill, but he manages to get a few snipes in at the fiddliness of what they do. (Of Shimabukuro, he says “his great skill means that his ukulele no longer sounds like a ukulele, which seems a bit of a shame , but happily that leaves the tuneless plunking to the rest of us.” I’ll let you decide.)

I learn plenty by ear, and I don’t read charts to play my guitar or anything, but you can be sure I teach my kids how to read music, and I do it through the uke. I take my tips from James Hill, who learned his uke as a schoolkid in Burnaby, B.C. from J. Chalmers Doane’s method book; the two have since written their own method book series for kids. And the premise is that the ukulele is a fantastic instrument for teaching theory. Less shrill than the recorder, there is a quiet privacy for the beginner to stumble through; and without a mouthpiece to worry about, students can practice their singing, too, which is not only a great skill for everyone but also (plugging back to Grove-White’s “just plunk around” approach) what a lot of people just want to be doing anyway. Hill and Doane’s book doesn’t introduce chords until late in the first act, and I think that’s wise: chords are so easy, and once you get going, it’s easy to just rip on through and forget about the notes that build them up. Better to get the practices – and the understanding of the instrument – in early.

I say chords are easy: Grove-White includes some really sound advice for the absolute beginner, who can easily get demoralised by changing chords.

“It really doesn’t matter how slowly you go to begin with, but getting used to changing chords is the KEY to playing the ukulele. Keep practising, and remember to take breaks in between. Stopping practice for a bit is NOT giving up; it’s an important part of the process. While you’re busy doing something else, your brain will  be going over what you’ve just learned, so you’ll find that every time you come back to practise again, you’ll be able to change chords a little quicker, until you can do it without your tongue sticking out of the side of your mouth like an idiot.”

What to do in that break? What the very English Grove-White continually prompts you to do througout the book: make a cup of tea.