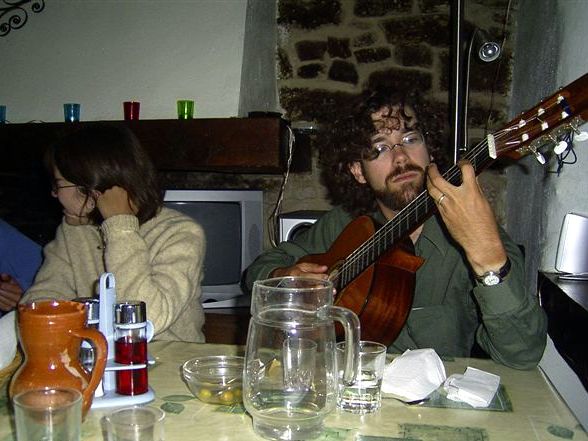 We were back in Canada in July, and I now curse myself for not thinking to fish out my journal from the Camino. Ten years ago, my wife and I walked 800 kilometres from the Pyrenean border to the grand cathedral city in the corner of green Galicia. I kept a couple of journals, in fact – one for the reflective narrative of the walk, and another thin black notebook that fit in my pocket into which I scrawled immediate notes – images, distances, quotations, particularly good meals.

Its two most potent functions, though, were musical. First, I wrote song lyrics in it – and I composed four good ones whilst walking. Okay, three good ones and a comic riff on a comic song called “Rick the Newfie” by Ottawa folk writer Charlie Gardner. Charlie is one of many who met at Rasputin’s most Wednesday nights to play songs at the legendary open stage. Rick, the aforementioned Newfie, was another, and Charlie’s song was a tribute to him, with a stompy jangle and a drawled-out accent. In the original, Rick has an encounter with Death whilst fishing, but the naïf manages to outwit the spirit visitor. I jotted down “Mike the Pilgrim” with a similar motif, in which Mike meets Death; but before he is taken prematurely to his eternal rest, “up come three lads from Belleville” who “left Leon this mornin’ – where ya goin’ to today?” They thump the Grim Reaper with no trouble and invite the protagonist for a beer, so all’s well that is well in the end. I played it back at Rasputin’s with both Rick and Charlie in the house, and it went down a treat.

Another lyric was “Fear, the Pit, and the Snare”, which set phrases and images from Isaiah to a tune that was a little bit Tom Waits and a lot bit Bob Dylan, with Dylanesque fiery prophetic cadence and confident strum.

Two others, “Carry it Slow” and “High Road”, have become permanent parts of my set. “High Road” was the most complete of all, written on our first afternoon on the meseta. The song came fully formed, and the people I played it for when we got back home agreed it was one of the best things I had done.

The first two are lost to me, though, because I have lost the notebook. (You can see the top of it in my breast pocket in the picture above.)

I regret it for the loss of the original lyrics, but I regret it more so for the loss of a psychomusical travelogue. The second and most consistent function of the notebook was to host a record of the songs in my head as I walked – the silent soundtrack to my journey. I woke up the first morning in Saint-Jean-Pied-de-Port with Paul Simon’s “Me and Julio Down by the Schoolyard” setting me off: “I’m on my way. I don’t know where I’m going.” Later that day, fragments of Bruce Cockburn’s “Night Train” walked with me through the mountain passes.

Bruce returned to me at the high summit in the morning after a dubious climb out of Villafranca del Bierzo, as we looked down on the highway and thought of the pilgrims we knew, struggling and scuffling alongside it.

It was a more elemental record of the journey than the narrative journal, and I would be glad now to return to those lists, follow my steps through my ears. It’s only through fragments – glass shards – that I can look back, even at an intense and concentrated experience like this one. But a decade on, some of those shards are close – not a knife throw away.